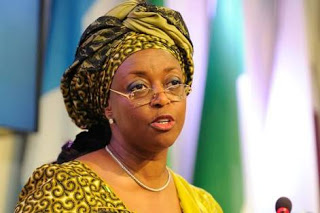 The Economic and Financial Crimes Commission has discovered a $37.5m (N11.75bn) luxury high-rise building on Banana Island, Ikoyi, Lagos, allegedly belonging to the embattled former Minister of Petroleum Resources, Diezani Alison-Madueke.
This is just as the EFCC revealed on Friday that it discovered $9.3m and £74,000 belonging to a former Group Managing Director, Nigerian National Petroleum Corporation, Mr. Andrew Yakubu. The money was allegedly kept in a bungalow situated in the slums of Kaduna.The two discoveries were made as part of investigations into a string of fraudulent activities in the NNPC, which cost the nation over $20bn at a time the oil price stood at about $100 per barrel on the averageAccording to impeccable sources within the EFCC, the building allegedly belonging to Diezani was purchased between 2011 and 2012. It is situated in the same estate where Africa’s richest man, Alhaji Aliko Dangote, resides.SATURDAY PUNCH  learnt that the building comprises 18 flats and six penthouses.Properties on Banana Island are believed to be among the most expensive in Africa with a plot of land selling between $4m (N1.25bn) and $6m (N1.8bn), according to Forbes Magazine.A source at the EFCC said, “The aggressive drive by the EFCC to recover all hidden assets of former Minister of Petroleum Resources, Diezani Alison-Madueke, who is under investigation for corruption and money laundering, produced another breakthrough this week with the discovery of a property acquired through shell companies by the former minister at upscale Banana Island in Lagos.“The property is a 15-storey edifice comprising 18 flats and six penthouses.“The property was acquired by the former minister between 2011 and 2012 at a total cost of $37.5m from the developers, YF Construction Development and Real Estate.The property was allegedly acquired in the name of a shell company, Rusimpex Limited under the control of certain Mr. Afamefuna Nwokedi of Stillwaters law firm, in Lagos.”Last year, the commission seized an $18m mansion in the Asokoro area of Abuja allegedly belonging to the ex-minister.She has, however, denied all the allegations levelled against her.Meanwhile, the commission has recovered $9.7m and £74,000 from a former GMD of the NNPC, Mr. Andrew Yakubu.Ironically, Yakubu, who served as the head of the corporation between 2012 and 2014, is the key witness of the EFCC against the Chairman of Atlantic Energy Brass Development Limited and Atlantic Energy Drilling Concept Limited, Jide Omokore, who is standing trial for an alleged $1.6bn fraud.The EFCC said in a statement by its spokesman, Mr. Wilson Uwujaren, that the money was found in a safe hidden in a slum in Kaduna State.The statement read in part, “A special operation conducted by operatives of the EFCC on February 3, 2017 on a building belonging to a former Group Managing Director of the NNPC, Dr. Andrew Yakubu, in Kaduna yielded the recovery of a staggering sum of $9,772,800 and another sum of £74,000 in cash.“The huge cash was hidden in a fire-proof safe. The surprise raid of the facility was sequel to an intelligence which the commission received about suspected proceeds of crime believed to be hidden in the slums of Sabon Tasha area of Kaduna.“On arrival at the house, the caretaker of the house, one Bitrus Yakubu, a younger brother to Andrew Yakubu, disclosed that both the house and the safe where the money was found belong to his brother, Andrew Yakubu.“When the safe was opened it was discovered that it contained the sum of $9,772,800 and another sum of £74,000.“On February 8, 2017, Andrew Yakubu reported to the commission’s Zonal office in Kano and made statement wherein he admitted ownership of the recovered money, claiming it was gift from unnamed persons. He is currently assisting the investigation.”

Drake And Jennifer Lopez Separate After 2 Months Of Dating