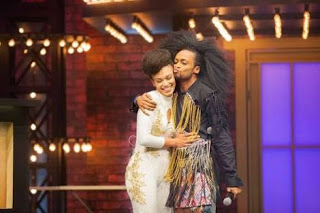 Media personality, Denrele Edun, has been announced as the new co-host of TV show, Lip Sync Battle. Denrele, will be co-hosting the show with South African actress, presenter and model, Pearl Thusi.On the new deal, the excited TV personality said:
“Co-hosting Lip Sync Battle Africa is truly the answer to a prayer I never made. The universe truly opened a door, and I’m gonna make sure I jump right inside and do it.
“It’s quite surreal – I was a contestant in Series 1 who flew in last minute and “spiritually” won his LSB challenge, and now I’ve been elevated to co-host,” said the television personality.
Monde Twala, vice president, BET youth & music, Viacom, speaking on the signing said
“Pearl and Denrele are going to make an awesome team. Pearl’s star quality is unmistakeable and she is a consummate professional, while Denrele’s a true original –bold, exciting and just on the right side of crazy! His extraordinary energy and total unpredictability should be a fascinating and explosive addition to season 2 of Lip Sync Battle Africa,” Tawla said.
Follow us on Instagram @sofovilla | Follow us on Twitter @sofovilla | Like our page on Facebook via @sofovillamedia

I Have Always Wanted To Be Unique – Olamide