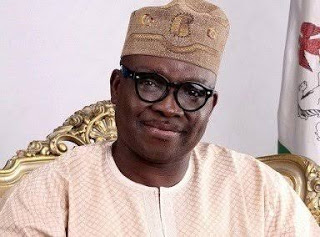 Ekiti state Governor and Chairman of the Peoples Democratic Party, PDP, Governors Forum, Ayodele Fayose has said that he would soon become Nigeria’s Vice President and subsequently, the President of Nigeria.
Fayose made the statement during a live interview on African Independent Television, AIT on Tuesday.“I will be the vice president of Nigeria, even the President very soon,” he said.Speaking on the emergence of Senator Ali Modu Sheriff as the party’s legitimate chairman as ruled by the High Court that sat in Port Harcourt, Fayose said that those supporting the Senator are political nonentities.“Senator Ali Modu Sheriff is a general without soldiers not to talk of having a battalion. If he is sure of his stand and strength, let him go for a popularity contest with Senator Ahmed Markafi.” “Without any gain saying, ‎Markafi is high above Sheriff. Markafi has the state governors supporting him. The National Assembly caucus are backing Markafi.Former ministers, former governors, former members of the National Assembly are also in support of Markafi.“In quantity and quality of support, Markafi is shoulder high above Sheriff who is only deluding himself with the rent-a-crowd ‎politicians that he goes to town with. All the organs of the party, including the Board of Trustees, are firmly behind Markafi,” he said.

BBNaija: First photo of Gifty outside the house