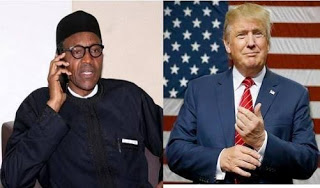 The White House Press Secretary and Communications Director, Sean Michael Spicer in his introduction of Tuesday’s White House Press Briefing, mentioned that President Trump spoke with President Buhari of Nigeria and Jacob Zuma of South Africa as well as receiving the Prime Minister of Canada, Justin Trudeau on Monday.
Recall that President Buhari, Monday afternoon from the United Kingdom spoke to American President Donald Trump on telephone at the request of the latter.
According to President Buhari’s spokesman, Mr Femi Adesina, the conversation was cordial and President Buhari congratulated Trump on his election as president of the United States and on his cabinet.
He said both leaders discussed ways to improve cooperation in the fight against terrorism through provision of necessary equipment.
Follow us on Instagram @sofovilla | Follow us on Twitter @sofovilla | Like our page on Facebook via @sofovillamedia

Get very good NetBooks for a pocket-friendly price… Order now!