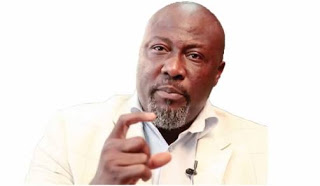 Senator Dino Melaye will this morning Thursday, file a N5 billion libel suit against an online media platform, SaharaReporters,Vanguard gathered late yesterday.
The senator who represents Kogi West Senatorial District,on the platform of the ruling All Progressives Congress, APC, according to a source,is taking the action over the organisation for alleged defamation of character, wrongful accusation, among other charges.The suit, according to his media office, would be file at the Federal Capital Territory, FCT, High Court, at 9am today.When contacted for confirmation by Vanguard, the Kogi born legislator admitted that he had concluded arranment for filing of the suit this morning.Recall that Melaye has been embroiled in certificate scandal since Sahara Reporters, an online media platform, published report that the lawmaker never graduated from Ahmadu Bello University, Zaria, where he attended his first degree course.The development court the Senate attention Tuesday, leading to its decision to refer the matter to its Ethics and Privileges Committee for investigation ,when Senator Ali Ndume, APC, Borno South, brought up the issue during plenary.The committee was directed to investigate the claim that he does not possess an authentic first degree certificate from the Ahmadu Bello University, Zaria.During the day’s plenary presided by the Deputy Senate President, Ike Ekweremadu, the upper legislative chamber decided to conduct the investigations, following a point of order raised by ousted Senate Leader, Senator Ali Ndume, who noted that both issues, raised by the online medium, borders on the privileges of the senators. Ndume, brandishing a copy of a newspaper which reported the alleged certificate forgery, said the reports have caused insults to be rained on the Senate by Nigerians.“My colleagues that are following events, particularly online, have seen, heard or read the rain of abuses on this Senate and the misconception of the fact that we invited the Customs CG based on a very unpopular policy that affects the people we represent, but now we are faced with this and the president has been found to be involved in this National Assembly,” Ndume said. Ndume also argued that there had been cases of investigations into allegations of certificate forgery by lawmakers in previous assemblies, citing those involving Hon. Salisu Buhari, Hon. Bello Masari and Hon. Dimeji Bankole.“Here in the Senate, in the Fourth Assembly, (Evans) Enwerem was accused and it was also investigated, (Adolphus) Wabara was accused of collecting bribe and it was investigated and determined. “So, a lot of precedents have been set,” he said, and prayed that the matter be referred to the ethics committee.“Accordingly, I will appeal we refer the matters to Ethics and Privileges Committee to investigate so that our colleagues would be cleared and this Senate will stand as it is supposed to,” Ndume said.After allowing Ndume to raise his point of order, Ekweremadu referred the issues to the Ethics and Privileges Committee, which is expected to report back in four weeks.