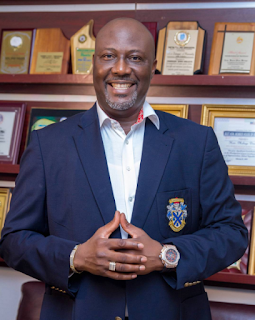 Harvard University in Boston, United States, on Tuesday debunked a claim by Senator Dino Melaye that he at no point in time graduated from the prestigious Ivy League school.
The school confirmed that Dino Melaye presented himself in November 2016 only for a one-week seminar in leadership and this doesn’t qualify anyone as a Harvard alumnus.
The fraudulent claims of possessing several degrees and certificates have continued to escalate as London School of Economics and Political Science (LSE) has also discredited the senator’s assertion that he possesses a degree from the UK university.
The university stated that it had absolutely no evidence that the senator received any formal education at the reputable university. LSE is one of the higher institutions of learning where Melaye claimed that he had earned one certificate or another.
In an email to SaharaReporters, Candy Gibson, a Senior Media Relations Officer at LSE, stated,

“We have checked our records and can find no evidence of Dino Melaye having any degree qualification from the London School of Economics and Political Science.”

The flamboyant Senator claimed that he obtained seven degrees from several institutions, including Harvard and LSE.
On various sites, including the official Senate online page as well as social media forums as LinkedIn and Twitter, Melaye has bragged over eight post graduate degrees he has both home and abroad. This claim has been exposed as bogus after a colleague of his,Senator Ali Ndume urged the Senate’s Ethics and Privileges Committee to investigate allegations that Melaye didn’t properly graduate from Ahmadu Bello University in Zaria (ABU).

Melaye has been caught in a major certificate scandal in which Examination Officers at the Department of Geography, ABU, where he took undergraduate classes, confirmed that he did not graduate from the institution.  They went further to say that the documents he presented to the National Youth Service Corps (NYSC) were manipulated between Melaye and his then Head of Department, Prof. David Ogbonna.
The Examination Officers pointed out that he was registered in the university as Daniel Jonah O. Melaye, a name they said was neither in the graduation brochure of ABU when his set graduated, nor found in any other graduation document. In particular, the exam officers pointed to how during his final year, the HOD added 2-course units to boost Melaye’s CGPA.
Melaye had reportedly bribed university officials to produce fake transcripts, on the basis of which he attended a program at theUniversity of Jos, the University of Abuja, and currently at ABU. Several of his classmates and comrades also disputed his claim that he was a Students’ Union Government President at ABU, at best, they stated he was a president of the National Association of Geography Students (NAGS)from where he was impeached for fraud.