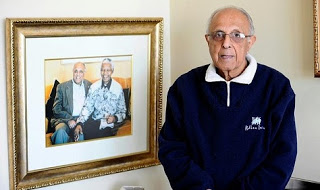 Kathrada was among those tried and jailed alongside Mandela in the
Rivonia trial in 1964, which drew worldwide attention and highlighted
the brutal legal system under the apartheid regime.

He died in hospital in Johannesburg after a short illness following brain surgery.

Kathrada spent 26 years and three months in prison, 18 of which were on Robben Island.

After the end of apartheid, he served from 1994 to 1999 as parliamentary
counsellor to President Mandela in the first African National Congress
(ANC) government.

“This is great loss to the ANC, the broader liberation movement and
South Africa as a whole,” Neeshan Balton, head of the Ahmed Kathrada
Foundation, said in a statement.

“‘Kathy’ was an inspiration to millions in different parts of the world.”

His activism against the white-minority apartheid regime started at the
age of 17, when he was one of 2,000 “passive resisters” arrested in 1946
for defying laws that discriminated against Indian South Africans.

Mikel Obi, His Fiancée and Their Twin Move To China