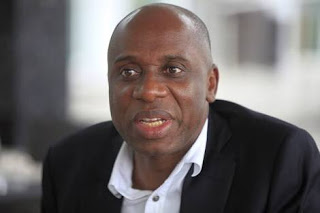 He said he has no business, link or connection to the money or property and that he does not know who owns the money or the apartment. He also dismissed the claims by his successor, Mr. Nyesom Wike that the money belongs to him (Amaechi).

Wike had alleged at a press conference on Friday night, that “the money in question belongs to the former Rivers State Governor, Chibuike Rotimi Amaechi.” In a statement released by his Media Office in Abuja on Saturday, Amaechi described the claims as malicious, frivolous and another failed attempt by Wike to divert attention from the mess he has created in Rivers State.

According to the statement, “Wike has stolen Rivers State dry. Wike and his gang have frittered billions of naira of Rivers people money away.

“Rivers State is perpetually in crisis, the state in a mess as Wike has made a total mess of governance in the State. That child who sits there as governor is confused, he doesn’t know what to do. Wike’s only solution is to attack Amaechi.

“Since he became governor, Wike sleeps and wakes up every day, with a sole, one-point agenda to attack and denigrate Rotimi Amaechi, no matter how ridiculous and silly he sounds.

“Everyday in Rivers State, there is one frivolous, false story of what Amaechi did or didn’t do. Same pattern, the same blatant lies with no proof, same old concocted stories of corruption allegations against Amaechi told with different flavours.

“At this rate, if Wike is unable to perform his spousal duties, he will blame it on Amaechi. Yes, that’s how despicably low he can go in his consuming fixation to throw mud at Amaechi.”

“This latest outburst by Wike is typical of him. We are aware that Wike first tried to float the fake news of Amaechi’s ownership of the recovered $43million and the Ikoyi house in the social media using his minions and lackeys, spending huge sums of Rivers money on the failed project.

“His minions and lackeys were calling journalists, bloggers and media organisations to run the fake story with promises of almost irresistible mouth-watering compensation for using the fake story.

“When that failed and the story didn’t gain traction that was when Wike decided to hurriedly hold the press conference Friday night, to rant and spew his outright lies, yet again without providing any proof of Amaechi’s ownership of both the property and the money.”

Amaechi described Wike’s malicious allegation of corruption against Amaechi in the sale of the Gas Turbines as not new.

He said that the false claim had been punctured repeatedly with facts and evidence of the transfer payments for the power plants into Rivers State government accounts by Sahara Energy.

He said, “The records of how the funds were spent and what it was spent on are in the records of the State government. Amaechi has absolutely no business or any interest whatsoever in Sahara Energy. The company was already a thriving business concern before Amaechi’s emergence as governor of Rivers State in 2007.

“We urge all right-thinking members of the public to completely disregard all the false, politically motivated no-proof claims by Nyesom Wike and his minions as it concerns Amaechi and the $43million and Ikoyi property.

“The false accusations by Wike is purely diversionary, a political smear campaign against Amaechi by Wike, while he steals Rivers State blind. The fake claims is a figment of the imagination of Wike, an ignoble fellow who’s so reckless, irresponsible, and disgraceful, and has debased the high office he holds in trust for the people.

“Wike is a rabble-rouser and should not be taken seriously. He has made several false claims like this in the recent past and never went the whole length to prove it because he had no proof.

“Many would recall how Wike was screaming all over national television stations just before the Rivers State legislative Rerun elections that he had an explosive video, containing earth-shaking revelations and he would show the video on national TV. Till date, no video, just talk and talk, telling more and more lies.”

He challenged Wike to charge him to court if he has any shred of evidence that the money belongs to Rivers State and was kept in the Ikoyi apartment by him.

“But like his numerous frivolous accusations in the past, we know he won’t go to court. He has nothing to substantiate his blatant lies. This Wike’s recent tale like his previous ones is a big sham, a disgraceful political drama, and a campaign of calumny to defame and destroy the sterling reputation of Rotimi Amaechi. This is now Wike’s sole life ambition,” he added.

He urged Nigerians to note that “Wike’s reckless, irresponsible and fictitious tirade against the President Buhari administration at his media briefing of Friday” was a declaration of war against the Federal Government.

I don’t know why people dislike me – TBoss