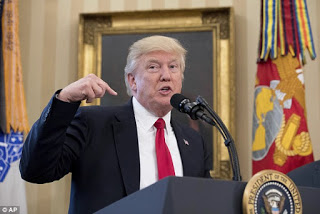 President Donald Trump signaled that he’d be willing to deal with the increasingly hostile country of North Korea unilaterally if China won’t play ball.  ‘Well, if China is not going to solve North Korea, we will,’ Trump said in a new interview with the Financial Times. ‘That is all I am telling you.’
Trump will meet with Chinese President Xi Jinping next weekend at his Mar-a-Lago resort on Florida.Asked if Trump would be able to cut a deal with the Chinese leader, Trump told the Financial Times that he has great ‘respect’ for both Xi and China.‘I would not be at all surprised if we did something that would be very dramatic and good for both countries and I hope so,’ Trump explained.  Trump said he planned to bring up North Korea doing the two-day affair.‘China has great influence over North Korea,’ the American president pointed out. ‘And China will either decide to help us with North Korea, or they won’t.’The billionaire businessman suggested that China could be incentivized by trade.‘It is all about trade,’ Trump said.He continued to grumble about how the U.S. has an ‘unfair deal’ when it comes to trade with China, but said he planned to hold off any talk of tariffs until his next encounter with Xi, as this first meeting will serve as an introduction.‘You know when you talk about, when you talk about currency manipulation, when you talk about devaluations, they are world champions,’ Trump said of China.‘And our country hasn’t had a clue, they haven’t had a clue. The past administration hasn’t had and many administrations – I don’t want to say only Obama; this has gone on for many years – They haven’t had a clue,’ the president continued.‘But I do,’ the businessman-turned-politician added.The Financial Times asked Trump if he believed he could solve the North Korea problem without China’s help.‘Totally,’ Trump replied. ‘Totally.’

#BBNaija: See top 5 housemates that made it to final stage