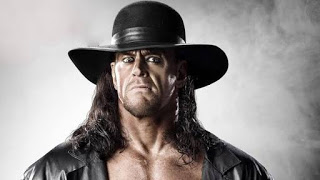 American professional wrestler, Mark William Calaway, better known by his ring name The Undertaker  has left his fans in floods of tears after he signalled his retirement from wrestling.
The Deadman, who is 52-year-old Mark Calaway, was cleanly defeated by Roman Reigns in the headline main event at the Camping World Stadium in Orlando as he was pinned after a devastating spear.

The wrestling legend dropped his gloves, hat and trenchcoat in the middle of the ring at the end of Sunday night’s WrestleMania 33.The Undertaker was hit with multiple Superman Punches, Speared through a table and was pinned to the disappointment of the crowd.After taking a while to get up, the camera panned around the stadium as the fans applauded their hero.Taker then appeared in his classic long coat and hat and began to wander around the ring in darkness.He then took off his hat, coat and MMA-style gloves and placed them in the middle of the ring – a sign that he has ended his in-ring career.

The Undertaker then made his way up the long ramp, raised his arm in the air and disappeared slowly down the trap door he came from earlier.Other WWE superstars from past and present then took to social media to thank The Undertaker for his 25-year service to the industry.

He was part of the first-ever Casket Match at Survivor Series in 1992, the first-ever Buried Alive match in 1996 and the inaugural Hell in a Cell Match in October 1997.