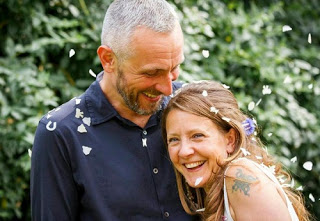 A grieving husband who slept next to his wife’s dead body in their bedroom for six days says he couldn’t bear to see her taken off to a mortuary in a bodybag. He said he was determined to keep her at home with their four children and not hand her over to a funeral director.
The dad now wants to reassure others that staying close to a loved one’s dead body is nothing to be scared of. Russell said he washed and dressed Wendy’s body and placed it into a coffin which he called a “cocoon” in the couple’s bedroom.Russell said: “Wendy died very peacefully, fully sedated, in no pain in mine and Dylan’s arms with our ever faithful dog Elvis smuggled up right next to her too. “She looked absolutely beautiful, just like she always did in life: no effort, no make-up, just radiant beauty.“We have been fooled by TV and films into thinking there is something to be scared about with dead bodies  there is not, I can assure you.”Wendy, 50, was diagnosed with cervical cancer in 2006 – just after the couple’s joint 40th birthday  and was told three years ago she had six months to live.But she shunned chemotherapy and radiotherapy and embraced “natural health”, Russell said.The couple bought a caravan and travelled round Europe, but in September last year returned to Britain as Wendy’s pain became unbearable.But she was determined to die at home, and was nursed by Russell, her sons Luke and Dylan Nichols and Russell’s sons Benjamin and Dominic Davison, until her death on April 21.Russell, also 50, said: “For a long time I have been determined to have Wendy at home when she died.“I did not want her in the mortuary or handed over to a funeral director, I wanted us to take care of her ourselves at our family home, and have her in our bedroom so I could sleep in the same room.”He said keeping Wendy at home was like “an emotional decompression chamber”, which helped the family come to terms with her death while she was still there.Russell said: “The idea of her being taken away in a plastic bodybag hours after death is so alien to us all now we really don’t think we could have taken it.”