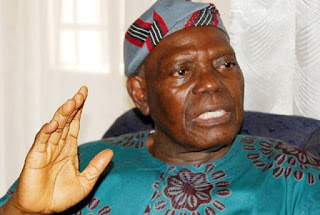 The former interim National Chairman of the All Progressives Congress, Chief Bisi Akande, has appealed to Nigerians to start praying for the restoration of President Muhammadu Buhari’s health in order to avert a looming crisis which the development could throw the nation into.
Akande, who made the appeal in a statement he issued on Monday, said he knew the President was seriously ill when he did not show up in Kaduna last Saturday for the wedding ceremony of his grandson.He stated that Nigerians needed to pray for the recovery of the President, whom he said had been fighting corruption seriously since he assumed office.He said that corruption had started fighting back now and the nation needed Buhari to hold on to ensure a total victory against the forces of evil.Akande, however, warned those who might want to make political gains from the President’s ill health to have a rethink, saying Nigeria of today was quite different from that of 1993.The statement read, “The health of the leader is intricately intertwined with the health of the nation. It is more so in a delicately fragile union of nations called Nigeria. I did not see President Buhari at the wedding of his grandson in Kaduna last Saturday. I was sad and I wept. “When last we met at the wedding of his daughter in Abuja last December, I complained to him that I was not happy about his stressful looks. His reply connoted some allusions to circumstances where an honest man fighting corruption is surrounded mostly by unpatriotic greedy ruling class. He felt painfully frustrated.“He assured me he would soon be going on vacation. I then knew that corruption has effectively been fighting back. And I prayed for Nigeria. That was why Asiwaju Bola Tinubu and I rushed to meet him in London in February this year when he was sick and could not return as scheduled from his vacation. The rest is history but we must appreciate that his poor health is already taking its toll on the health of Nigeria as a polity. “There are two challenges facing the country today. The first and the most critical is the health of the President which, unfortunately, is a development beyond his control and for which we did not prepare. The second is the disorder and lack of cohesion between the National Assembly and the Presidency.“These are two great red-flag dangers that have the potential of plunging the country into unprecedented chaos and of destabilising the gains of democracy since 1999.Human rights lawyer, Mr. Femi Falana (SAN), and seven organisations on Monday said they felt compelled to advise Buhari to heed the advice of his London doctors to take further vacation and attend to his health.Buhari’s absence at the last three Federal Executive Council meetings and last Friday’s Jumat service was a confirmation that his health was deteriorating contrary to the claim by the President’s handlers that ‘there is no need for apprehension over the matter’.Falana and the groups expressed this concern in a statement jointly signed by them on Monday.PUNCHNG