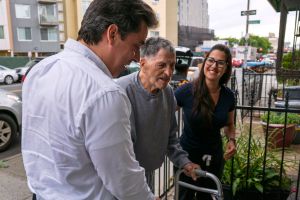 A reputed Colombo crime family underboss and the oldest inmate in the federal prison system has been released at the age of 100.

Three of his co-defendants, his attorney and the judge who sentenced him in the bank-robbery case are all dead.
Newsday reports John “Sonny” Franzese left the Federal Medical Center in Devens, Massachusetts, in a wheelchair just before noon Friday. He was serving a 50-year sentence for bank robbery.
Franzese defied criminal stereotypes by living quietly on Long Island, adhering to a disciplined work schedule and maintaining a stable family life, his son Michael said. He was the subject of a December 1965 Newsday profile headlined “The Hood in Our Neighborhood” by former Investigations Editor Bob Greene, who called Franzese “a prototype of the rising young executive.”
But a year later, he was embroiled in three separate investigations for heinous crimes: accused of ordering the murder of a one-eyed mob gunman turned informant, Ernie “The Hawk” Rupolo, who was found in Jamaica Bay with a weighted rope around his neck and a chain around his legs; charged with masterminding the home-invasion robbery of an Oceanside jukebox executive, in which the man’s teenage sons were handcuffed to a pipe in the cellar; and conspiring with four hoods to rob banks from Utah to Massachusetts.
The cases generated a steady stream of headlines and photos starting in the fall of 1966. Franzese’s reputation for brutality was so great that when a Newsday photographer snapped a dramatic picture of Franzese being escorted out of the Nassau County courthouse by policemen carrying shotguns, the picture appeared in print without crediting the photographer.
Franzese was acquitted in the murder and home-invasion cases but convicted in April 1967 in the bank-robbery conspiracy — a crime his family maintains he didn’t commit.
In an extraordinary move, then-federal Judge Jacob Mishler sentenced Franzese to 50 years in prison, with no minimum term. With that hanging over his head, prosecutors offered to get his time reduced if he talked.
He didn’t.
Despite his lack of cooperation, Franzese managed to get paroled at least six times, according to the U.S. Bureau of Prisons. But each time, he ended up back in prison — typically for associating with other felons. He last got sent back in 2010 when, at the age of 93 and in a wheelchair, he was found to have been shaking down the Hustler and Penthouse strip clubs in Manhattan and a pizzeria in Albertson.
He did his time, and is now facing life on the outside as a centenarian, having outlived virtually everyone else in the case that cost him a third of his life.
NEWSDAY.COM
Follow us on Instagram @sofovilla | Follow us on Twitter @sofovilla | Like our page on Facebook via @sofovillamedia