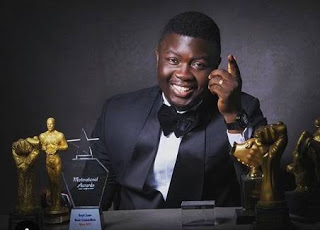 We all pass through hard times in life, including those who you think have arrived as comedian Seyi Law narrates his ugly past for those who have ears to hear.

For Seyi, life has not been a bed of roses at all for he has lost alot of millions that would have taken him to another level in his life.
Although these hard moments come and go but there were also times he appreciated God for hisfavor upon his life.
The comedian took to his IG page to share his ordeals and how he had lost N44million in two years, N30million on wrong business and N14million to his show.

“The last three (3) years have been my toughest years since I started comedy. The social media revival by @nathanielblow has brought me somerelief and opened my eyes to great understanding. It is no lies that people receive favour in our industries and somehow, I seem to be the only one who doesn’t. I have sown seeds over hardwork, loyalty and kindness in several places, but they seem to yield no fruits.

“In 2014, I lost over 30million Naira to a wrong business, 2015 was another year of lost with almost 14 million lost to the show; Fast and Funny and an 8 months old pregnancy evacuation. I don’t even want to mention 2016 going into 2017, but yesterday God showed me Prov 31: 30a: FAVOUR is DECEITFUL saying to me If I had received favours to get to where I am I probably would have forgotten too quickly where I was coming from.

“I want you to know that to be favoured is a good thing, but to live your hoping on the luck of favour is stupidity. Let favour meet the works of your hands. People have promised me, failed and helped people I introduced to them. It only means they are not my channels of blessings. What has been your points in life? What has been giving tormenting you?

Please let go and let God have his way. God can bless the works of your hands without favours from men and you will be celebrated.” 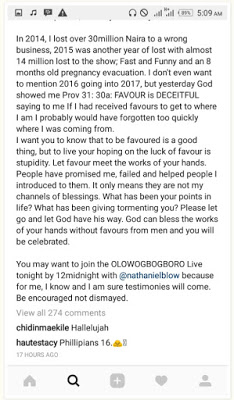 Real Madrid players, Morata, Kovacic and Lucas Vazquez to get married this weekend