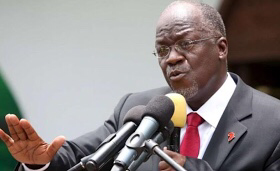 Tanzania’s President John Magufuli has placed a ban restricting school girls who get impregnated from going back to school. The President made this known while addressing Bagamoyo District residents during his three-day-tour of Coast Region on Thursday.

Magufuli accused some of the nongovernmental organisations (NGOs), which have been urging the Tanzanian government to allow teen mothers back to school, of being used by foreign agents.

“There are many things that girls, who are impregnated can do after delivery; they can join VETA (Vocational Education Training Authority centres), they can learn sewing but they can’t go back to school,” said President Magufuli.

According to him, if such girls were to be allowed back to school, then they would encourage other girls to engage in sex.
“If we were to allow them back to school, one day we will find all girls who are in Standard One have babies,” said President Magufuli.

It’s understood that for some months now Magufuli’s administration has been pressured by some NGOs to allow teen mothers back to school but the President is giving no room to grant such decision.
The NGOs advocating for girls’ rights to education, are said to be urging the government to formulate a legal framework that would allow teenage mothers to resume studies after giving birth.
Follow us on Instagram @sofovilla | Follow us on Twitter @sofovilla | Like our page on Facebook via @sofovillamedia

If you feel people I hailed in my songs are fraudsters, report to EFCC -9ice tells Falz (Video)