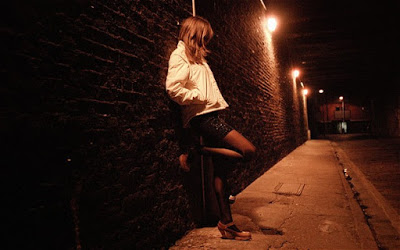 Prostitution amidst Nigerian students is rapidly increasing and is indeed something which has really created lots of controversies today.

Lets see what a passionate young writer has to say about this crucial matter.


ACADEMIC PROSTITUTION: The Nigerian Story
By Ojukwu Daniel
A couple of weeks back, I sat with my sister as we discussed issues ranging from her academic life to her social and spiritual status. Her examinations were fast approaching and deep down I knew that it was only a matter of time before the issue of money would spring up – I was just playing the smart ‘James Bond’ role of a caring and concerned brother, waiting for the best opportunity to dose off to some hot gossip about a sadist lecturer or an annoying best friend. The heavenly bodies were just about to grant my requests when – “Brother I need money” – hit me from the opposite chair. As a hardworking student that I also am, I had to tell her to wait till I make some. She simply said, “Brother it’s urgent and I have to get money now unless you want me to join them.” Now that’s where the problem rang bells.

I always wanted to do an article on prostitution in Nigeria and its growing acceptance amongst corporate professions and even the so called legal systems, most especially after videos surfaced online of an Akwa-Ibom state University student who arrested a man who picked her up and gave her N1,000 against the agreed N20,000 for the night, but this went beyond Nigeria, it was a global thing. Brazilians, Mexicans and Malaysians even boast a worldwide network of Prostitution on streets and across borders but it is safe to say that it wasn’t a part of our culture. The issue now went beyond having young female graduates, dropouts or less privileged, litter the streets at odd hours, to creating an educational system that promotes this uncharitable act as the ‘only’ means of survival.

In Nigeria today, it is no longer news when a chief or chairman drops off another man’s daughter at school on a Monday morning after a weekend of ‘Business Trip’ down her matrimonial virtues; the smiling lady who now has a bulging purse to pay her school fees and buy books with, blows a kiss to the waiting 50 year old man/baby who in turn blushes like melted jelly. They are everywhere, in every higher institution, almost every department and level. The big girl clique; housing the ones who are ready to handle a sugar-daddy aristo and give him the same pleasures a ‘poverty stricken boyfriend’ would demand, with the added advantage of getting some of the allocation that should have gotten home to a patient house wife – call it using what you have to get what you want.

When I say it wasn’t part of our culture, I draw reference from the facts that in ancient Hausa tradition, a lady had no business with a man until she was in her teens and ready for marriage. A Yoruba lady would not be caught dead in another man’s car in the name of being dropped off from school and the issue of lecturers/students’ affairs was at an all-time low. Where then did it all go wrong, how did we lose the plot?

Speaking to lady who pleaded to have her name off record, she had this to say in Pidgin English; “ahnahn, se na today you just de hear about that one? Oga everybody wan survive so as man de chache de make money, we sef go rub person back small and e go drop bar shikena, na give and take.” The openness of this shocking revelation struck me. Gone are the days when virginity and virtue were celebrated among young spinsters and bragged about by their parents. Who then is responsible for this ‘Give and Take’ mechanism?

The Homefront
Charity is believed to begin at home but when the home isn’t as charitable enough to finance the upgrade from an underprivileged lifestyle to the ‘Big girl’ clique, it becomes an ultimate search to find a man who’s ready to cripple his own home to satisfy your needs while short-changing his own daughter who in turn gets herself a similar man in a cycle where no one is immune. Sadly though, when the young girl who is supposed to be struggling without the books you couldn’t afford, strolls in with a new iPhone and bag of new clothes allegedly gifted by a close friend, no one cares to probe! No one cares about the real story, after all, “she’ll one day live alone so it’s good that she can fend for herself.”

Peer Pressure.
I prefer to look at this factor as the ‘Bandwagon effect’. A certain school of thought is of the opinion that we are what we see, read, hear and experience. It goes same for student prostitution. Every lady gets attracted to the material benefits and added attention derived from the flashy lifestyle and no matter how cultured or religious they may be, it tends to cross the mind occasionally. These constant negative energy transform to reassurance of; “isn’t it just sex?  He’ll have his way for one or two hours and I’ll get what I need, at least I’m doing it for an important purpose.”

School system
It’s funny how I blame the school system for being the cause of a norm that is now threatening to cripple the same academic system’s image by presenting it as a breeding ground for indecent activity. What’s funnier should be the fact that over 80% of these ones who are responsible for patronising the academic hustlers, have their children schooling abroad in a much friendlier environment while the remaining ones are over here shouting sermons into their daughters’ ears about how demonic men are looking for ladies for ritual. They ask their daughters to bring all their troubles home so as not to fall prey to the same demonic hustle gang that they belong to.

The lecturers aren’t left out. The cost of attending a federal university may be relatively lower, but when placed in contrast to the recommended minimum wage, does it remain cost-friendly? Then we have the lecturers who expect you to get a ‘necessary’ textbook and greet them with a smile before coming to their offices for guidance and academic counselling for ladies ONLY. Hmmm!

The culture of the African child and society is gradually drifting to oblivion as we adopt a “new normal”. Moral decadence has fallen to levels beyond communal or personal repairs and what is currently needed is a nationwide sensitization and criminalisation of the act of student prostitution with stiffer penalties so as to deter anyone nursing ides of joining the bandwagon. My sister’s probably going to have ladies breathing down her neck for inspiring this with our little talk but in the long run, she’ll look back and smile about being part of a “New normal”.

Tekno and Iyanya to do a collaboration soon