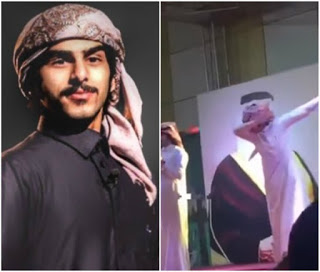 Almost every youth and young adults in Nigeria knows how to dab it and has to right to showcase their dabbing skills anywhere in the country without anyone interrupting.  Unfortunately, it’s not so in some parts of the world.

Saudi Arabian Singer, Abdallah Al Shahani, was reportedly arrested by the Police for dabbing during a live concert performance.

Oak News reports that Abdallah who is also an actor and TV Personality, was arrested during a music concert in the City of Ta’iff.
In the ‘dab’ video which had long gone viral, Abdallah was filmed dropping his mic as he asked the audience to clap along, before pulling off the dab.
Abdallah Al Shaharani later shared his apology on Twitter after he was released by the authorities who believe that the dab dance used by most celebrities worldwide has a drug culture undertone.
His tweet reads:

‘I am most apologetic to our honorable government and my dear president for the spontaneous movement I made in the Ta’if Festival. Accept my apology.’

Watch the dab video that has caused lots of controversies: