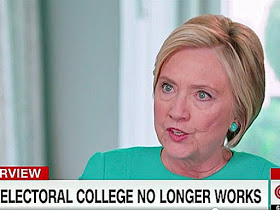 Hillary Clinton made an argument for dissolving the Electoral College in an interview with CNN on Wednesday night.

“I think it needs to be eliminated. I’d like to see us move beyond it, yes,” Clinton said.Clinton made the assertion while discussing her book, “What Happened,” which recounts the turbulent 2016 US presidential election. Clinton lost the Electoral College to Donald Trump, who pulled in 306 votes to Clinton’s 236 last November.The Electoral College has 538 members who select the US president based on the popular vote in every state, as opposed to the national popular-vote tally, which is why a candidate who loses the popular vote can still win an election.Clinton won the popular vote by nearly three million ballots, an achievement her supporters have frequently called up in protests during the first half-year of Trump’s presidency. Clinton herself has touted it — most recently when she promoted the news website, Verrit, an outlet that calls itself “Media for the 65.8 million,” a tagline that references Clinton’s popular vote total.The former Democratic candidate is not the first to suggest the Electoral College should be abolished. Al Gore, who won the popular vote in 2000, but still lost the election to George W. Bush, continued to support the current system, until Trump won in 2016.And Trump did the opposite six years before his unlikely presidential victory: “The electoral college is a disaster for a democracy,” Trump wrote on Twitter in 2012.Once he became president-elect, he said the Electoral College was “actually genius.”Source: CNN