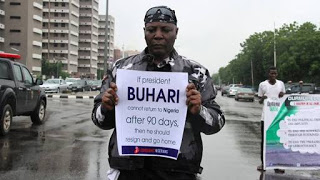 Imo State Government has alleged that Charles Oputa aka Charly Boy was hired by the opposition to attack Governor Rochas Okorocha, the All Progressive Congress and President Muhammadu Buhari.

The state government also accused chairman of Owerri branch of the Nigeria Bar Association (NBA), Lawrence Nwakaeti of having joined in the attack on the governor.A statement signed by Okorocha’s chief press secretary, Sam Onwuemeodo, said Charly Boy was recruited since 2014.“He used his late father’s burial service in Oguta to launch his war against the governor after he had collected money from the government for the same father’s burial, and he has continued the unprovoked and unwarranted war.”“The governor influenced construction of the road to Oputa’s house, built a court complex named after the Late Jurist, Justice Chukwudifu Oputa and gave money for his burial, which Charly Boy personally came to Government House to collect.“He said before the burial, they told him that the former president had directed that he should not allow Okorocha to speak at the burial service not minding that protocol demands that he should talk.“Acting on the script given to him, Charly Boy snatched the microphone from a sitting governor, who came to honour his late father and who also gave money for the burial and he did that to satisfy Okorocha’s opponents and see whether that could help them in the 2015 election, and, up till now, Charly Boy has not cared to apologise to the governor, in spite of the general outcry his action attracted then”.Onwuemeodo said Charly Boy continued the war by visiting Owerri at the weekend to insult Governor Okorocha.“He deceived some Human Rights people like Prof. Chidi Odinkalu into coming to Owerri over the relocation of Ekeukwu market without such innocent figures knowing he was recruited since 2014 against Okorocha”, the statement added.Dailypost