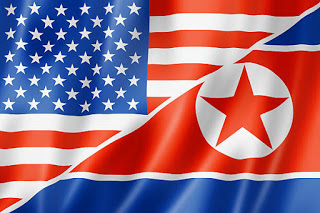 Threats from North Korea will be met with a ‘massive military response’, US officials said last night after the rogue state announced it had carried out its most powerful nuclear test yet.

The US had ‘many options’ which could lead to the ‘annihilation’ of North Korea, Defence Secretary Jim Mattis said.
‘Any threat to the United States or its territories, including Guam, or our allies will be met with a massive military response, a response both effective and overwhelming,’ Mr Mattis said.

‘Kim Jong-un should take heed of the UN Security Council’s unified voice. We are not looking to the total annihilation of a country, namely North Korea, but as I said, we have many options to do so.’
Earlier, when asked if he planned to attack Pyongyang, Donald Trump replied, ‘We’ll see’, and said he was holding a meeting with his military leaders.
Mr Trump also tweeted that talk of appeasement was pointless because North Korea ‘only understand one thing’, as the state promised further tests.
His hard-line rhetoric was prompted by Pyongyang’s announcement that it had successfully tested a weapon up to ten times more powerful than the Hiroshima bomb that could kill millions of people.

The regime described its testing of the hydrogen bomb as a ‘perfect success’. Kim Jong-un was pictured inspecting the peanut-shaped device – the design and scale of which indicated it had a powerful thermonuclear warhead. State media said it was a bomb intended for an intercontinental ballistic missile (ICBM). In July, North Korea tested two ICBMs that are believed to be capable of reaching the US mainland.