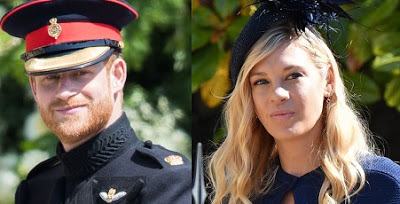 Prince Harry had a tearful phone call with one of his ex-girlfriends few days before his wedding, as claims have it.
The Duke of Sussex is said to have spoken to Chelsy Davy where they both ‘acknowledged Harry was moving on’.The pair had an on-off relationship for seven years but Chelsy was always uncomfortable in the spotlight.Both she and another ex, Cressida Bonas, were invited to the ceremony at Windsor Castle where they watched their former flame marry Meghan Markle. Neither ex-girlfriend attended the evening party at Frogmore House.According to Vanity Fair, the phone call between Harry and Chelsy took place in the run-up to the lavish wedding.A friend is reported to have said: ‘It was their final call, a parting call in which they both acknowledged Harry was moving on.‘Chelsy was quite emotional about it all, she was in tears and almost didn’t go to the wedding.‘In the end, she went and promised Harry she wouldn’t try and gatecrash the party.’Chelsy was Harry’s first serious girlfriend and they had an on-off relationship between 2004 and 2011.Zimbabwean-born Chelsy met Harry in Cape Town, South Africa, during Harry’s gap year. She is said to have moved to Leeds University to study law to become closer to him.The graduate, now 32, attended several events with the royal including Prince Charles’s 60th birthday.However she was always uncomfortable with the attention that came from being a royal girlfriend.She now runs her own jewellery company, Aya.