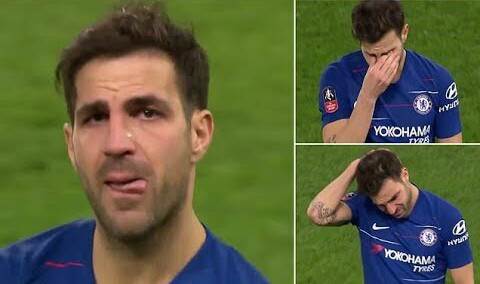 Former Chelsea’s Midfielder, Cesc Fabregas, is ready to move to Monaco as he and his manager would be negotiating his transfer deals on Sunday, 6th January, with the management.

He bid Chelsea farewell after 501 appearances in English football when he was substituted in the closing minutes of Chelsea’s victory against Nottingham Forest.

Fabregas was captain and missed a first-half penalty but his team ran out as comfortable 2-0 winners thanks to two goals from Alvaro Morata.

The 31-year-old Spain international left the pitch in tears as he was replaced by N’Golo Kante, milked the applause and embraced manager Maurizio Sarri.

Fabregas has appeared in 198 games for Chelsea in all competitions and scored 22 goals since signing from Barcelona in 2014.

The former Arsenal midfielder is expected to be playing for Monaco soonest, where he would be coached by his former team mate, Thiery Henry.

“Time flies,” said Fabregas. “It feels like last week that I started playing professionally and now it’s more than 15 years. It goes so fast and you have to be ready every three days, for the criticism with everyone saying how good you are and the ups and downs”