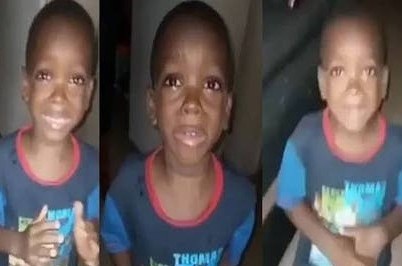 The little boy in the viral “mommy calm down” video has gotten an ambassadorial deal with Combat Domestic Violence and Abuse Foundation.

In reaction to the video, Combat Domestic Violence and Abuse Foundation, made the announcement via their social media page, begging people to search for the boy. It reads thus:

“Calm Down!
We, the president, (Chief Dozie Kaidi Obiaku), members and trustees of the Combat Domestic Violence and Abuse Foundation would like to enjoin the general public to help us get to the boy in the viral video․

We would love to make him an ambassador.

Every violence in the world could be avoided if we learnt to clam down.We have adopted ‘Calm down’ as a key mantra now and we would love to bring the boy in as one of us.

Please help us find him. Thank you.”

They later shared another post confirming they have contacted the boy and are already in talks on how he could help them preach against domestic violence. Pictures below:

Related Topics:Mummy Calm Down
Up Next

Rapper, Vector, Explains Why You Can Never Hate Women