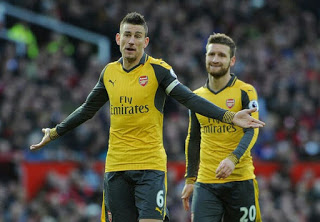 France defender, Laurent Koscielny has urged his Arsenal teammates to take the pressure off Arsene Wenger and says they must take responsibility for their poor performances.

Six defeats in their last nine matches have seen the Gunners knocked out of the Champions League by Bayern Munich in a very embarrasing fashion and slip out of the top four in the Premier League.
Wenger’s future at the Emirates has been the subject of increased scrutiny as he approaches the end of his contract in the summer.
Koscielny says the players must step up their performances as they attempt to take the heat off their under-pressure boss.
“He’s someone who’s been very important in my career,” he said in a national team press conference on Thursday, when asked about Wenger.
“It’s him who gave me my chance at Arsenal, who fashioned me as a player and as a man.
“We’re in a complicated situation but it’s not only his responsibility. It’s us, on the pitch, who have to do more.”