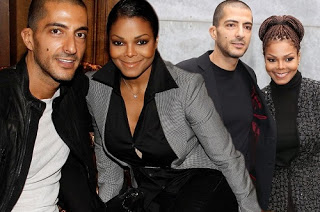 Janet Jackson is separating from her husband Wissam Al Mana. A rep said that the couple are “not divorcing, but separating”. In 2013, Janet revealed that they were actually married after the couple got sick of seeing reports about planning their lavish, expensive wedding.
The Together Again singer revealed that they’d tied the knot in a secret ceremony the year before. But now, they have split just months after Janet gave birth to their son, Eissa, becoming a mum for the first time at the age of 50. Janet had changed a lot recently, becoming more reserved after living her life in the public eye for years.Just last October, a pregnant Janet was seen walking around London, hand-in-hand with Wissam, in an outfit much more modest than her usual get-up. But her husband, Qatari businessman Wissam – worth up to £800million – was thought to be uncomfortable with her overtly sexual image and Janet’s progressive handle on both sexual liberation and her own body. It’s said that Janet’s friends felt it was her husband who encouraged her to tone her image down.And it was believed that Janet converted to Islam following their marriage. She has never confirmed or denied that she had become a Muslim – yet she took to frequently ending concerts with the blessing “Inshallah” (if God wills).Wissam, 42, is CEO of the multinational Al Mana business conglomerate, his net worth reckoned to be four times Janet’s own wealth.As well as their London house, the couple have homes in Manhattan’s Trump Tower and Qatari capital Doha.It was reported at the weekend that the marriage was ending.“Sadly, Janet and Wissam have decided that it wasn’t working and to go their separate ways,” a source told the Mail on Sunday.“They’re both busy people but determined to be good parents, even if they’re apart.

#BBNaija: Couple breaks up because of Efe and TBoss (photo)