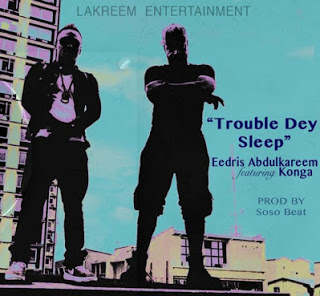 That moment when two guyz who have been in the industry for a very long time comes together to do a song, you should know you get nothing but the best.
Eedris Abdulkareem cooked a wonderful tune he titled TROUBLE DEY SLEEP, featuring his colleague in the industry, Konga.


The single was released in response to the Honourable Minister of Information, Lai Mohammed’s call on practitioners of the creative industry not to take their video production abroad. This calls on the political class, civil servants and people in authority to practice what they preach by patronizing Nigerian schools and hospitals as well as consumption of Nigerian made goods. Because that’s the only way the health and educational infrastructure could be developed.

Shedding more light on the song, he said he was inspired by the challenge from the Minister of Information which he felt should not be a one way thing, because to make Nigeria great requires sacrifices from all; both the high class as well as the common man” Denouncing the Minister of Information for his gaffe that Senegal has the best jollof rice, the one time Olympic torch bearer, declared emphatically that Nigeria is number one in everything including having the best jollof rice in the world. The song is released on the label of Lakreem entertainment. Watch video below:

I am Happy Changing Lives with Comedy – Papa Ajasco