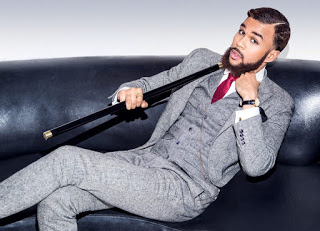 Singer
Jidenna Theodore Mobisson, a Nigerian hip hop artist based in the
United States, has said one of his goals is to be fluent in Igbo.

The Classic Man, as he is fondly known, said he once took a class in the US to get a good grip of the language.

“I
speak Igbo a little but not the way I wish. I actually took a class
when I was in the US to speak more fluently and Aunty Ifeoma, God bless
her, was just excited that we were there and she went so slow that at
the end of the semester, we didn’t get anywhere,” he said.

“One
of my goals is to be fluent so I actually hired a teacher recently to
Skype with me so I can learn on the road so hopefully one year from now,
I’ll be much more fluent than I am now.”

The 32-year-old singer also said he does not have a sound of his own yet.

According
to Jidenna, his sound, a combination of his “favourite” genres, is
still evolving.“ I still don’t think that the music I have released thus
far is the artiste in me, I mean it’s not my sound yet. I have not
crafted it.

“My foundation was in hip-hop but influenced by
other sounds. When I was growing up in Nigeria, Bob Marley was like the
biggest god so him and Fela were my biggest heroes when I was a kid. I
stir all that together and try to make music but I don’t think it has
all that at the same time but now I have figured out the formula.

Arsene Wenger’s Future At Arsenal To Be Reviewed After Season